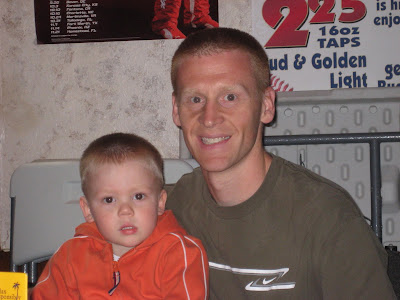 This post isn't going to be all about me running yesterday's marathon. I'll save that for another day. This is going to be about one of the nicest, funniest, fun-loving, most happy-go-lucky guys I've ever met ...


I've got to preface the story with a few words about my marathon fiasco yesterday. You'll understand why.

I powered on my GPS at the high school just as we were heading out to the parking lot onto to see LOW BATTERY displayed on the screen. Just another thing that'd gone wrong. Usually I can get a couple of hours out of a low battery, but the unit completely died before I'd even left the parking lot. I'd run three miles (one each Wed, Thurs and Fri) since the last charge. So I was going to run this thing with no idea of pace or time. But there was nothing I could do about it (other than add "backup watch" to my marathon checklist, should I choose to try this again). I'd just have to run comfortably and let the chips fall where they may.

I did get 4 splits ... mile 1 was 7:47 after a nice downhill. Rick and his pace group were with me at mile 3 so I asked him the time (24:10). There was a gal at the half and when I asked her the running time, she said her device was non-functional but it was 8:50 AM (so 1:50 for the half). I didn't get another split until I saw 3 guys right at mile 22 and so I asked them the time and told them my GPS stopped in the school parking lot. The running time was 3:14. My thought ... I sure hoped Melby was done as he was in the shape of his life and was going for a BQ and I wanted that for him more than anything else for the day. If it'd been possible, I'd have taken a DNF for myself if that would have somehow given Melby a BQ. Little did I know that Paul was finishing the marathon at 3:14, earning him a huge new PR and his coveted BQ.

Long story short, when I got to the finish I found out some tragic news. One of our own had gone down right at the finish and was at the hospital. It was Melby. I was devastated. Sitting in the shelter trying to choke down a piece of pizza, I started crying. All I could think about was Melby. How could this have happened? Why him? Why not me? He just had to be OK. It just couldn't be any other way. When I found out we'd lost him, I was beside myself with shock, grief. I just started sobbing and I couldn't stop. I arrived at the hospital and there were other Rochester runners there and others arrived after I got there. I chose to stay until Paul's wife got there and I'm so glad I did. It was the right decision. My heart was and is breaking for her ... for their kids ... Paul's parents ... and the many, many friends he's left behind. He was one of the best ... he was everybody's friend. And we are REALLY going to miss him. I have been changed for the better having known Paul ... and my little world is also changed having lost him.

I am crying again as I write this ... we love you Paul.

I'm so sorry you lost a friend. My thoughts are with his wife and children.

Renee,
I am so deeply sorry for the loss of your friend, and for his family! I know how close running friends are, they are just like family. Please send my sympathies, to you, your running family, and his wife and kids.
deb b.

What nice thoughts you have on Paul and his family.

Thanks for sharing them with us. I found your blog and shared it with the other teachers here in Oklee, some of which were here when Paul was a student.

What a comfort to them to see Paul's crooked smile -

I ran the Lake Wobegon Marathon along with a couple of my buddies and we were all stunned and saddened to hear that Paul died.

I hope you don't mind, but I have provided this blog link along with information on donations for the Melby family on our MN Running Wild Facebook page. While none of us knew Paul we all feel the difficulty of the loss and wish to send our collective condolences to all of Paul's friends and family.

Very nice indeed! Thanks for this! Cheap Diablo 3 items

Ramblin' Renee
Rochester, MN, United States
I am a mom, a runner, a biker, a gardener, a quilter and baking cookies is my passion!

Which show had the best ensemble cast?

Who has the best popcorn?

Have you mowed the lawn yet this year?

Did you watch The Royal Wedding live?

What flavor of Easter bunny do you prefer?

Have you ever eaten a Dunkin' Donut?

Are your taxes done?

What is your favorite flavor of m&m?

Do you make New Year's resolutions?

Are you running with ice spikes or Yak Trax these days?

Regarding snow removal, do you ...

Do you generically call carbonated beverages ...

Do you hit the stores before dawn on Black Friday?

In how many different cities have you lived as an adult (age 21 and older)?

What's your favorite kind of puzzle?

Do you think the Twins will will the American league penant?

Do you actually read those Terms and Conditions when you're installing software on your computer?

How old are you?

Which is your favorite flavor of pie?

Are you going to the state fair?

What is your thermostat set at during these dog days of summer?

Have you ever owned a convertible?

How do you eat corn on the cob?

What do you put on your corn on the cob? Select all that apply.

In a public rest room do you prefer ...

When you park in a parking lot do you tend to ...

Do you plan to travel outside the U.S. this year?

What do you usually do for lunch during your work day?

On an airplane, where do you prefer to sit?

What surface is on your kitchen floor?

What time do you get up on the weekdays?

What time do you go to bed on the weekdays?

Is the radio in your car most likely on AM or FM?

What's your favorite sport to watch during the winter olympics?

What's your favorite part of the Thanksgiving meal?

Have you ever been to New York City?

What kind of chocolate do you prefer?

Do you recycle your plastic bags?

Do you drink your coffee ...

Do you use a clean towel every time you take a shower/bath?

Do you prefer to drink pop ...

Are you right- or left-handed?

Do you keep your race numbers after a race?

How do you get to work?

Do you prefer your peanut butter ... (choose all that apply)

What is your favorite brand of running shoe?

Which of the following do you do before a run? Select all that apply.

What is your favorite ice cream flavor?

Have you ever done a triathlon?

What's the farthest you've ever gone on a single run?

Do you run with any of these gadgets? Check all that apply.